Where did United Nations technical assistance advisors in the early years come from? Where did they go? A comprehensive “experts list” from 1954 provides the data to answer.

The UN created a Technical Assistance Administration (TAA) and started sending out technical assistance advisors in the early 1950s. I’ve written about the TAA’s short, strange history elsewhere. But what nationality were the “experts” chosen to go overseas? Which countries were the darlings of the TAA, receiving the most advisors? The 1954 list helps to answer those questions. 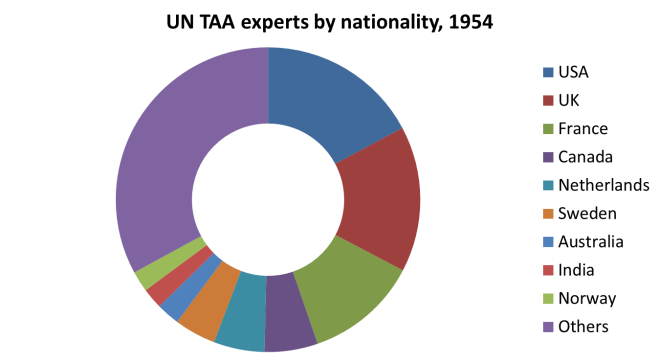 In August 1954, the TAA had 398 experts on its list. Of those, 70 held American nationality. The UK followed with 63 and France stood third, with 49. Canada (23), the Netherlands (22) and Sweden (18) led a large number of other countries. But this is a crude measure. One advisor was listed as “stateless.” One man listed as British was in a long-drawn out process of obtaining Canadian citizenship. Others were dual citizens. What stands out is the domination of Europe and North America, of course, but also a striking diversity within this – no country approached 20%.

Where did they go? The TAA favoured middle-sized countries seen as having good potential for the sort of economic development the TAA appreciated. Some advisors were posted to UN headquarters or regional projects. Of the 352 working in defined countries, the largest group (28) was in Burma, followed by Turkey (25), Bolivia, Indonesia, and Yugoslavia (24 each), and then Iran and Pakistan (21 each). 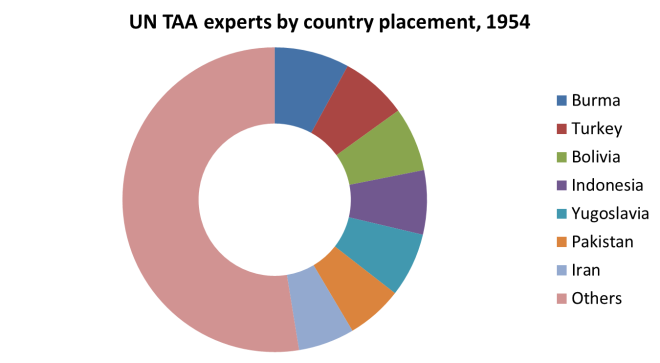 While India led the way as the biggest recipient of aid dollars in the 1950s, TAA advisors spread out. (India tried to be a source of experts, especially in Asia, contributing to a pattern in which lower-income countries sent advisors within their region – Latin American and Middle Eastern states sent quite a few advisors to their neighbours.)

In those seven biggest destination countries for TAA advisors, no country was dominant enough in experts to dominate the technical assistance field. The largest national contingent stood at 8 (French advisors in Iran). British in Bolivia, Americans in Turkey, Swedes in Yugoslavia – none over a third in any destination country. 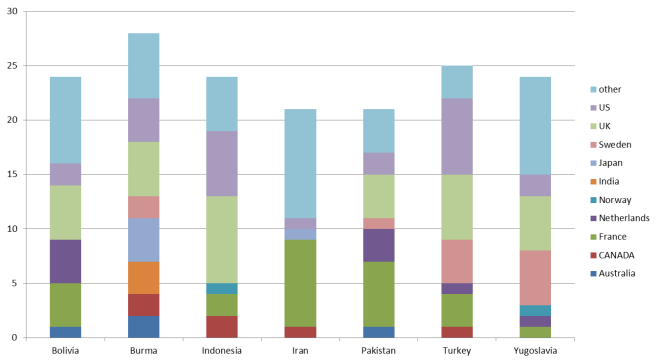 The TAA tried to paint itself as diverse. In the range of its advisors’ home and destination countries, it did better than many to reach that goal.

Learning from our past, for a better future

Institute for Peace and Conflict Studies