An Australian development advisor in the USSR: Eleanor Hinder 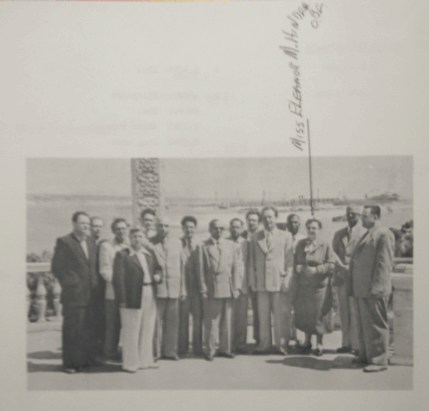 In 1955, a team of government officials from India toured the Soviet Union, examining everything from coal mining to civil aviation. Distinctive in their group photograph was Australian Eleanor Hinder, the only woman and the only non-Indian on the mission. She is identified with a ruled indicator line in pencil on this photograph of the group posed in front of the Kakhova Dam construction site, part of the great Donbass industrial complex taking shape in what was then the Ukrainian Soviet Socialist Republic. The photo comes from the official trip report submitted by the United Nations Technical Assistance Administration, sponsor of the study tour. The pencil was wielded by Viola Smith, Hinder’s partner in life and love, on the copy of the report housed in Hinder’s personal papers. The image draws together several threads: the way the United Nations bridged development and diplomacy in its technical assistance work; the role of countries seen as less central in postwar international politics; and the occasional visibility of key actors like Hinder whose names are seldom recalled when stories of international politics are penned.

The UN was founded with a strong Security Council partly in order to avoid the perceived security failures of its predecessor, the League of Nations. In the event, the Security Council’s permanent members failed to work together. Unable to act as it wished on peace and security, the UN found a more satisfying global mission in economic development. In the early years of the 1950s, this took the form of technical assistance, a scheme for wealthier and more technically advanced countries to send experts to less developed countries, where they would share their knowledge and skills. It established a Technical Assistance Administration within the UN Secretariat under the leadership of Canadian administrator and diplomat Hugh Keenleyside.

But technical assistance, like so much of the UN’s work, was caught up in the global Cold War. The USSR initially rejected technical assistance as a tool of American imperialism – no surprise, since technical assistance was first mooted as “point four” of US president Harry Truman’s foreign policy agenda. But in 1953, the USSR offered to contribute the equivalent of a million American dollars. Soviet officials insisted that this money would be entirely in unconvertible roubles, causing the United States and its allies to block the offer. In response, Keenleyside flew to Moscow and brokered a deal that brought the Soviet Union into the UN technical assistance plan, removing technical assistance at least a little bit from the Cold War.

The next step was to put flesh on the bones of the deal by starting to explore what sorts of help the USSR could offer. India was the first country to be considered as a Soviet aid focus. Although she had just retired, the TAA tapped Eleanor Hinder for the “very important” job of accompanying this group, giving her the title of Ambassador without Portfolio. Six sub-groups in fields from water power development to heavy chemicals crisscrossed the country to great interest, heightened by the parallel arrival of Indian prime minister Jawaharlal Nehru in Moscow for a state visit.

Hinder’s travelogues, mostly written while in flight with a special ink pen designed to work at high altitudes, reflect her impressed fascination with the new Soviet Union, flushed with the success of its postwar reconstruction and the sense of opportunity after the death of Stalin. Women held positions of authority everywhere, far different from in the West, she wrote. Four thousand women had started building a mighty dam on Ukraine’s Don River during the Second World War and finished soon after the war’s end, launching a heroic tale in which the region now generated 10-million kilowatt-hours of power – and the Soviet Union added 4-million kilowatts more each year. Here was a signature project, featured in the image above.

Development in the USSR, Hinder reported, was pushed forward by popular dedication and hard work and a vast range of specialist institutes. She was especially impressed by great canal in the Uzbek Soviet Socialist Republic. The contrast with hardscrabble Afghanistan, its women all clad in burkhas, struck her most of all. “On the Uzbek side – fine strapping women, all of them working it seems, striding along freely.”

In Moscow, Hinder “felt indeed that I was participating in a historic moment, that the sharing of technical knowledge between these two peoples through the United Nations had significance beyond even the great benefits involved in the sharing.” The “wider significance” included the value, for many other countries, of impressions that India’s team would bring back. There was the possible relevance of models for development offered by the constituent republics such as Georgia and Uzbekistan. The chances for Soviet technical assistance, with the UN as channel, were much more favourable in the new Soviet Union of the mid-1950s. And so, Hinder urged Keenleyside, “if we have the wisdom to grasp it, an opportunity is at hand.”

The tour emerged as triumph. The Soviets were happy with the new avenues open to non-communist Asian countries. Indian officials were happy at the new chances to draw on a major new source of aid. And aid officials at the UN were happy that they had opened a new channel for technical assistance and begun to in integrate the Soviet Union into the multilateral technical assistance world. Here was no small accomplishment: the TAA, headed by a Canadian and through the agency of a trip headed by an Australian, was taking steps that might cool global confrontation as well as boost economic development. Hinder, previously TAA bureau chief for Asia, was not given the Ambassador title idly. She was crucial in negotiations and throughout this story acted as both capable aid administrator and canny diplomat.

There was also a more personal side. The photograph of Hinder among the Indian officials is the visible side of this story. The less visible side is told in Viola Smith’s pencil line, carefully indicating Hinder’s position in the photograph. The addition was part of Voila Smith’s stewardship of Hinder’s papers, now in the State Library of New South Wales in Australia. It does not appear, of course, in copies of the report housed in the UN’s own archives in New York.

So who was Eleanor Hinder? She started work as superintendent of welfare at a department store in her native Sydney, then in 1925 moved to Shanghai to run social welfare operations in the International Settlement. There she met American diplomat Viola Smith. Alongside her social welfare work in Shanghai factories, Hinder was named by the League of Nations as Protector of mui tsai, “girl slaves” working in the city. She went on to various posts with the British Foreign Office, UNRRA, and as an advisor on welfare and labour to Burma, Malaya, and Hong Kong, ending up with an OBE awarded by the British government. When Smith returned to the United States after consular and trade posts in Asia, Hinder sought work at the UN. She rose to important roles at the TAA partly because she had expertise in international development, but also partly because her “life-long friend,” as she phrased it, was an American and the couple wanted to keep living together.

The 1955 Indian study tour of the USSR allowed Hinder to retain residency in the United States as a UN ambassador even after her formal retirement. When final retirement came, Smith joined Hinder in Australia. Borders constrained the couple. Both made career choices that sacrificed opportunities in order to be together, even as both could point to impressive careers. The personal and the political intertwined. Hinder was an early proponent of UN official Margaret Anstee’s dictate for women at the UN: “never learn to type.” In common with many visitors to the USSR, she saw Soviet industrial muscle – but she also saw that women workers were as much a part of that as men, a far less common observation. The complex life stories of diplomats like Eleanor Hinder need to be seen to understand the diplomatic events swirling around them. A pencil line on a photograph in an official report can reveal as much as the report itself.