The Asian-African Conference Bulletin, published daily during the African-Asian conference at Bandung in April 1955, 65 years ago, is a significant and unused source in international history. In its pages, as much as in the conference hall around it, was born the idea of Asian-African solidarity and non-alignment. The Bulletin and other sources from the conference are now digitized as an e-dossier.

The creation of an idea of a “Third World” was one of the major themes of the 20th century. That “world” was born in Bandung, Indonesia, 65 years ago. Yet too few 20th century historians spend much time talking about the Asian-African conference and the world it gave birth to. The study is left to important networks outside the Western (and West-centric) historical mainstream, such as the Afro-Asian Networks project and the Bandung Spirit group, though there’s been an admirable revival in recent years with multiple perspectives on Bandung’s legacy – a literature too extensive to list here.

The conference was enormously important. It came at a time when the superpowers and their followers – Canada at the fore – were trying to divide the world into two sides. The Soviet Union’s chief ideologue, Andrew Zhdanov, spoke of “two camps.” So did the enormously influential US evangelist Billy Graham, using the same words. You were either with us, or against us. Or so thought the leaders of both camps.

So when Indonesia, for instance, was seeking its independence from Dutch attempts to recolonize the former Netherlands East Indies, the issue turned on alignment. The United States supported Indonesian independence after President Sukarno crushed a communist uprising. Canada aimed to avoid US conflict with the Netherlands as NATO was being formed. The independent Indonesia that emerged and joined the United Nations in 1950 was supposed to be pro-Western despite the socialist leanings of its leadership. (The first prime minister, Sutan Sjahrir, spoke of living in “the sphere of Anglo-Saxon capitalism and imperialism, as I discuss in my book Fire and the Full Moon.) Canada’s Security Council representative even managed to do an end-run over a Soviet veto against the new Republic.

Yet Indonesia, with other states that gained their independence, soon started trying to escape the cage of alignment. India, Pakistan, Burma and Ceylon backed Indonesia’s freedom struggle. At the UN, the representatives of these and other Asian countries soon began to make common cause. The Korean War showed them a world of superpower confrontation that they wanted little part in. The piddling support given to aid (then a small programme of “technical assistance”) showed that there was no willingness to create a Marshall Plan-style reconstruction effort for the former colonies as there had been for Europe – though the Philippines, for instance, suffered greatly from the war and most Asian countries counted vast numbers dead, and economies harmed far more by Depression and war than many European countries.

So in 1954, Indonesia and (again) India, Pakistan, Burma and Ceylon) gathered and compared “active and independent foreign policies” that would aim to build a more just world. They rejected the world “neutralism” since they were passionately engaged in global affairs, with the goal of altering the emerging superpower domination. They soon agreed to convene the 29-country Bandung conference.

There, they set in motion the growing concept of South-South solidarity. The newly-independent countries of Asia and Africa would find common ground, they hoped. They left the door open to more countries, with independence leaders and national liberation movements present – as the articles in the daily Bulletin reveal. (Existing literature has much to say about American supporters who came, but less to say about groups that get more attention in the Bulletin, such as the Somali Youth League or the Cypriot leader, Archbishop Makarios.)

The ideas of “non-alignment” and a “Third World” were born around the Bandung event. Neither term was used but in rejecting power blocs led by the two superpowers, Bandung was pioneering “non-alignment avant la lettre.” It was a French writer who coined the term “Third World” — not as a geographical description, but as a modern-day equivalent to the “third estate” of common people who figured so prominently in the French Revolution. It wasn’t going to be business as usual, Asian countries locating themselves in an existing system as best they can. It was going to be, in the Indonesian Revolution slogan, a world turned upside down. Here was the Third World as “project,” in the description of Vijay Prashad, not as place.

And though the 29 countries present came from Asia, the Middle East and Africa (including not-yet independent Ghana, then still known as Gold Coast), their project was global. The Asian-African Conference Bulletin makes this more visible.

The Bandung conference, in some ways, was an effort by Indonesian prime minister Ali Sastroamidjojo to take the Indonesian revolution global, to turn the whole world upside down, to pursue what President Sukarno called a “revolution of mankind” in the steps of Indonesia’s own revolution. It did not embrace the Soviet model, despite of Soviet expressions of support for Bandung (the US seemed implacably opposed: of its allies, only Canada sent greetings to the Bandung conference, which are printed in the bulletin). Instead, the model was “socialism à la Indonesia,” as Sukarno called it.

The same social-democratic development models were playing out in most of the countries present. One conservative historian discerned a common economic approach among what he dubbed the “Bandung generation.” More left-leaning observers, including African-American writers Ethel Payne and Richard Wright, also saw cross-border solidarity emerging – though they celebrated rather than decried it. 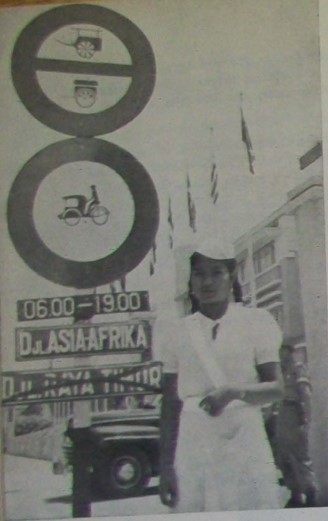 The thinking, in fact, was global, with its wellsprings in the global South, but flowing outwards to include left-leaning non-communist thinkers and planners from Europe, Australia, Yugoslavia and other far-flung places. Take Canadian socialists. They were unable to build the “cooperative commonwealth” of their dreams at home. But they did much to assist social-democratic planning in Burma (where poet, socialist and law professor Frank Scott was UN resident representative), in pre-genocide Cambodia (where Laval professor Louis Bérubé preached a “gospel of cooperatives” he had developed in 1930s Gaspésie), in Indonesia (where Saskatchewan petroleum planner J.T. Cawley promoted Indonesia’s interests and earned the hatred of the local American oilmen), in Ceylon (as Sri Lanka was called when Canadian socialist and writer Barbara Cadbury helped to found the local Planned Parenthood) and far beyond.

The Asian-African Conference Bulletin offers another window into the global dimensions of Bandung and the “Bandung spirit” that it birthed. Its English was fluent in part because of the editing skills of Molly Bondan, the Australian-born naturalized Indonesian who fell “in love with a nation” and worked the conference relentlessly. There, too, was Tom Atkinson, an Englishman who crafted Sukarno’s first English-language speech for the conference, aptly titled “Let a New Asia and Africa be born.”

The Bulletin carefully profiles each chief delegate in ways that both reflected and helped to construct their global images. It celebrated “national costume” at a diplomatic event in its photo spreads. Distributed daily, it helped to create a print-carried solidarity among participants and thus institutionalize the “Bandung spirit.” Its global press review was no effort at propaganda – alongside supportive editorials from Indonesia’s English language press are hostile columns from The Economist or the St. Louis Post-Dispatch and coverage of the African National Congress struggle against apartheid. Though attention has gone mostly to the conference’s final declaration and a war of words over communist colonialism between Ceylon and China, the Bulletin pays closer attention to the two working committees, on economic and cultural cooperation.

Newsletters are not simply dry accounts of what happened. They paint pictures – distorted perhaps, but important snapshots nevertheless – of their topics. They create, privilege and valorize textual records that influence the future. They build community – imagined or written into being – among their readers. Temporary newsletters published each day at key historical moments may help build community even more as they are leafed though, passed from hand to hand, saved as souvenirs and then brought out from musty filing cabinets as memory aids. The Asian-African Conference Bulletin, an odd and ephemeral newsletter poised between its official purpose and its free-wheeling editorial style, is just one of these sources. Like the Bandung Conference, this type of source is worth more attention.

One thought on “The African-Asian Conference Bulletin as historical source”