The League of Nations can’t get no respect. Among academics this is changing, as researchers tell redemptive stories about the League and the end of empires or the emergence of international society in this period, for instance. But the League’s image, for those who think about it, still tends to be mostly that of the useless talking shop that could not prevent military aggressions leading up to the Second World War.

Back in the League’s day, though, it was the chosen court of appeal for people seeking independence during a “Wilsonian moment” of self-determination. That’s true even for people living in territories ruled by such “non-colonial” powers as Canada, New Zealand, and Turkey. A quick skim of League of Nations archival materials in Geneva reveals appeals to the League for justice from places as diverse as Korea (seeking freedom from Japan), the Grand River Territory of the Six Nations Confederacy (1924), the Maori of Aotearoa / New Zealand (1925), Turkish-controlled Kurdistan (1925), Scotland (1928), the Vietnamese community exiled in Thailand (1930), and Baluchistan (1933) from whence came the assertion that the Baluch people had always been independent, never part of India.

Documents can help tell these stories, and show that these claims for independence are far from new, that claims to be free from British imperial control pre-date the foundation of post-British states like Canada and New Zealand. (Thanks to Bishop’s University undergrad Matthew Robinson for research assistance in finding these documents in Geneva.) 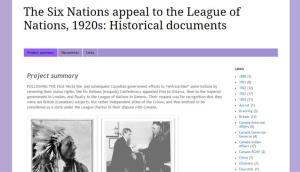 Some of the documents related to the appeal of the Six Nations Confederacy to the League in the early 1920s,  appear at a special blogspot site on the Six Nations Appeal that I created to support a forthcoming book chapter. This one shares documents from three archives on  how the Six Nations used images of ‘picturesque Indians’ to win European sympathy and the backing of the governments of Estonia, Ireland, Panama and Persia (a collection of countries without much in common other than a sympathy for the Six Nations cause and an unimpressed attitude towards Canada’s actions at the League).

There are many more.

When a Maori delegation arrived in Geneva in 1924 asking to see League Secretary-General Sir Eric Drummond, he dodged the group and asked a subordinate to deliver the bad news that the League could not help them – but not before noting the case was “very similar to that of the Chief of the ‘Six Peoples'” in its nature.

One that resonates the most may be from a group of Kurds in Baghdad, then controlled by the British Empire. The Kurdish appeal speaks of terrors committed by the Turkish government upon Kurds living in Turkey. The petitioners to the League felt the “national existence” of the Kurdish people was in threat from “ignoble killings” and asked “the civilized world” to help end “the bloody violence of the Turks against our oppressed nation.”

Time heals no wounds: these are mostly ongoing struggles, whether non-violent (Six Nations or Scotland) or all too violent (as in the case of the Kurds in Turkey). If the League had been able to provide justice, or even a hearing, might these disputes have been less visceral today?