But there are far more endangered, far more precarious, French-speaking minorities in Ontario, New Brunswick, Saskatchewan and all nine majority-English provinces. In fact, those minority groups — English-speaking in Québec and French-speaking in the rest of Canada — are what make this country what it is.

In the meantime, however, it’s worth protecting the minority official language communities. But to read leading English-Canadian media, you would think that only one of those communities — Québec’s anglophones — were under threat.

END_OF_DOCUMENT_TOKEN_TO_BE_REPLACED

Somehow, a study of low-level war between Indonesia and Malaysia in the 1960s has led me to reading about the history of fisheries cooperatives in Quebec’s Gaspe Peninsula.[1] My first book was a relatively straightforward diplomatic history of Canada’s relations with Indonesia, mostly dealing with the years from 1945 to 1965. My research for it left some (to me, at least) intriguing gaps. A short reference to the “wonderful zealot” Louis Bérubé being brought in as part of Canada’s efforts to defend a Malaysian federation founded in 1963 led me to wonder where this “zealot” came from. Why was a Quebec technical advisor working with Malay fishermen considered to be part of a defence effort? Chasing connections down archival avenues in Ottawa and Rimouski leads to some lessons about Canadian social democracy overseas. 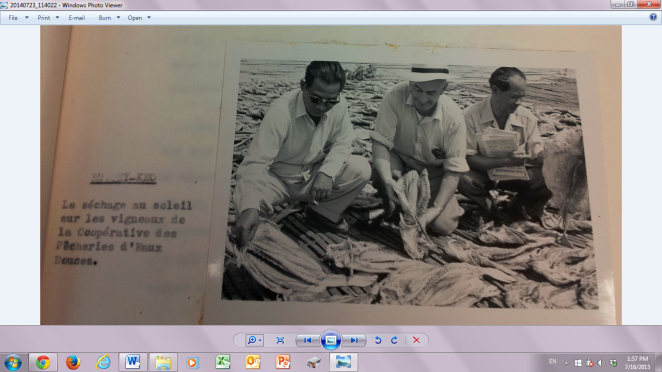 Louis Bérubé was in Malaysia as part of his third Asian posting as a technical advisor. The focus in studies of the history of development, and technical assistance in particular, has been on the United States government trying to re-invent the world in its own image, through modernization theory in particular. That focus is not wrong, of course, but it’s important to see the role of non-American agencies, such as the Commonwealth’s Colombo Plan and the UN’s Technical Assistance Administration, and the ways in which these other agencies differed in their approaches and personnel from the better-financed American technical cooperation programme. A key difference was that the TAA, especially, was dominated not by American New Deal liberals, but by social democrats – many of them Canadians.

Bérubé was one of these men. One Canadian diplomat’s memoir calls him “a wonderful zealot from Quebec [who] preach[ed] the cooperative movement gospel that fishermen could largely control their own destiny if they worked together to catch and market their own produce.”[2] This cooperative gospel was born from Bérubé’s work in the hardscrabble fishing villages of Quebec’s Lower Saint Lawrence and Gaspé regions and then simmered in his fisheries advising career in Asia. In Cambodia, Ceylon, and finally Malaysia, he advocated organizing fishers into co-operatives, creating credit co-operatives that could lend them the capital they needed to escape the clutch of rapacious traders, and capping it with marketing expertise to make sure that fish would find willing buyers, whether domestically or internationally.

Bérubé’s work was to spread the pre-1945 successes of cooperatives in Quebec to the post-1945 global South, and he sold this in Ottawa as the best way to defeat the communist threat. Recommendations painted in some cases as unfair infringements in capitalist markets were reasonable, he convinced many, because poor fishermen (and by implication, others living in poverty) could resist the siren call of communism only if offered the tools of co-operatives.

In making this point, Bérubé hearkened back again and again to his home region. Born in the last years of the nineteenth century in Ste. Anne-de-la-Pocatière, a village in Quebec’s Lower Saint Lawrence region, Louis Bérubé preached the co-operative gospel from an early age, beginning with a successful effort to build a cooperative among fishermen at Cap-des-Rosiers, at the tip of the Gaspé peninsula.

Quebec fishers lacked access to credit and markets, controlled respectively by banks and fish trading companies based in larger cities. So they had to build credit, expand markets, and diversify from salted to fresh and frozen fish in order to up fishermen’s incomes. Bérubé from the 1930s onwards stressed technical training of fishers and cooperative education. One outgrowth of this was the creation in 1938 of the École des Pêcheries at Ste. Anne-de-la-Pocatière, affiliated with Laval University. Bérubé’s experience as the school’s head of economics officials in Ottawa to invite Bérubé to advise on a request for fisheries assistance from Cambodia received in 1955.

Cambodia’s freshwater fisheries had been lucrative in the past, with tax on inland fisheries generating one-ninth of the French colonial state’s revenues. Bérubé’s interest went further: he sought to promote social change in Cambodia through cooperative organization. In his reports on Cambodia, Bérubé was explicit on this point and on the value of the Quebec fisheries cooperative model. And he appealed to the anti-communism that appealed both in Catholic networks in Quebec and in offices in Ottawa. Cambodian fishers, he wrote, were divided between big and small scale. Family fishers were “the smallest of Cambodia’s small people” (petit peuple). They were dominated by ethnic Chinese traders in “the same way, if not worse, than were our own fishermen under the iron hand of the fish companies in the 19th century. Something has to be done, or they will listen to the sing-song of Communist propaganda.”[3]

Bérubé also preached modernization. He ended his final report to the Cambodian government by worrying that it was the “messe de petits pêcheurs familiaux qui paralyse le développement des pêcheries.” They had to be brought swiftly into more modern methods to allow development to go ahead.[4] Poor Cambodian fishermen, he wrote, stood in the same position as had 1840s weavers in the English town of Rochdale, birthplace of the global cooperative movement. They, too, could organize themselves. The thread of cooperatives first spun in Rochdale and picked up around the world, including in Gaspé, was just as applicable in 1950s Cambodia. Cooperative education and organization had succeeded in Quebec, he concluded. “It can do the same here. And it must do it.”[5] Here was a social-democratic vision: cooperative organization as a path towards social justice that at the same time served the twin goals of modernization and anti-communism.

Why does all this matter? Bérubé saw models at home that could be applied in Asia, and preached them as a virtual “gospel” on the other side of the Pacific. Many in Asia welcomed this sort of technical assistance. Berubé’s thoughts, born of a Quebec Catholic social justice tradition, spawned models for Asian contexts. Studies of advisors like him add to the growing sense that Quebec prior to the Quiet Revolution was far from inward-looking, but was highly engaged across borders.[6]

[1] Thanks to Sarah Zwierzchowski for research assistance. Berubé’s story comes through in files in Library and Archives Canada files on technical assistance (RG 25, External Affairs, and RG 74, Canadian International Development Agency) and in his own papers housed at the Université du Québec à Rimouski. This study forms part of a future book project entitled Modern Missionaries: Canadian development advisors in Southeast Asia, 1945-65. It draws on a paper presented at the 2015 Canadian Historical Association annual meeting.